I like the new version, it's great, thanks.
A quick question- I have several contacts with KG4xxx which is not Gitmo but L4OM2 is crediting me with Gitmo. Gitmo is KG4AA- KG4ZZ(2x2) issued by the US Navy, not FCC.
Is there a way for me to edit the cty file so KG4x and KG4xxx do not get listed as Gitmo? Or does this need to be done in a program fix or update.

the cty file is changing lot of times so it does not make sense to edit for yourself. With next
cty update it will be overwritten. I will tell the team about this thread ...

again me. We have done some tests with KG4(xxx) and all showing United States. Are your shure that your CTY is
actual ? I have tested KG4(xx) ant that was show´n as Guantanamo Bay ....

I've observed some problems similar to Jim's with KG4 calls and thought it better to use this topic instead of creating a new one.

A few nights ago I worked KG4UXR and was surprised to see the world map indicated the center of the country when the Google map properly showed the station in North Carolina grid FM03kx. The DXCC was 291.

I then checked some KG4 2x2 calls which Jim has pointed out are issued to folks stationed at the Guantanamo Bay Naval Base in Cuba. The results were inconsistent but had some regularity.

These calls - KG4AC, KG4AJ, and KG4AK all work correctly, showing Gitmo on both maps and DXCC of 105. The gridsquares all come up as FK29kw. In QRZ, it shows Geosource - From DXCC.

I then checked some other calls like KG4JJ, KG4ZZ and KG4CQ. These show grid EM17iq, DXCC of 291 with the world map showing center of the country and Google map showing Wichita, Kansas. Oddly in QRZ these stations show a grid of JJ00aa which is out in the middle of the Atlantic Ocean.

So in the case of the KG4 2x2 calls it appears to work as well as it can if the QRZ information or perhaps some other database is correct. I don't know if the calls I've chosen are even active.

In the case of the 2x1 and 2x3 calls however, it doesn't seem that the world map is working correctly. It always shows these calls to be in the center of the country when they can be anywhere in the US. These are not special Gitmo calls. Every one I've checked does correctly show DXCC of 291 and the Google map works perfectly.

Perhaps this is much to do about nothing and I can't imagine how complicated it is to show stations in their correct location. I just wanted the team to be aware.

In my case about 1/2 the US calls I search show up correctly on user the right map but center of country on left map.
Top

I assume you are talking about calls other than KG4 2x1 and 2x3 calls. I haven't noticed this but will pay more attention. Maybe this is a bigger issue than just confusing the Gitmo calls.
73 - Tom NS8K
Top

Its not 100% of course but I see it a lot. Someone recently reported an Alaska station showing up in the middle of the US on world map but OK on other if I remember right. The guy was had recently moved but seems like it was same issue.

I thought I would find a call in my log that I could show you that would duplicate this but cant find anything this AM! Go figure.

To get back to the original topic, I just tested some kG4XXX calls using actual calls. Almost all of them show as Guantanamo Bay, even though they are located in the US. The one exception is KG4W, which displays correctly as US. I updated the country file and restarted Log4OM, and still getting this result. I have attached a screenshot of my configuration. 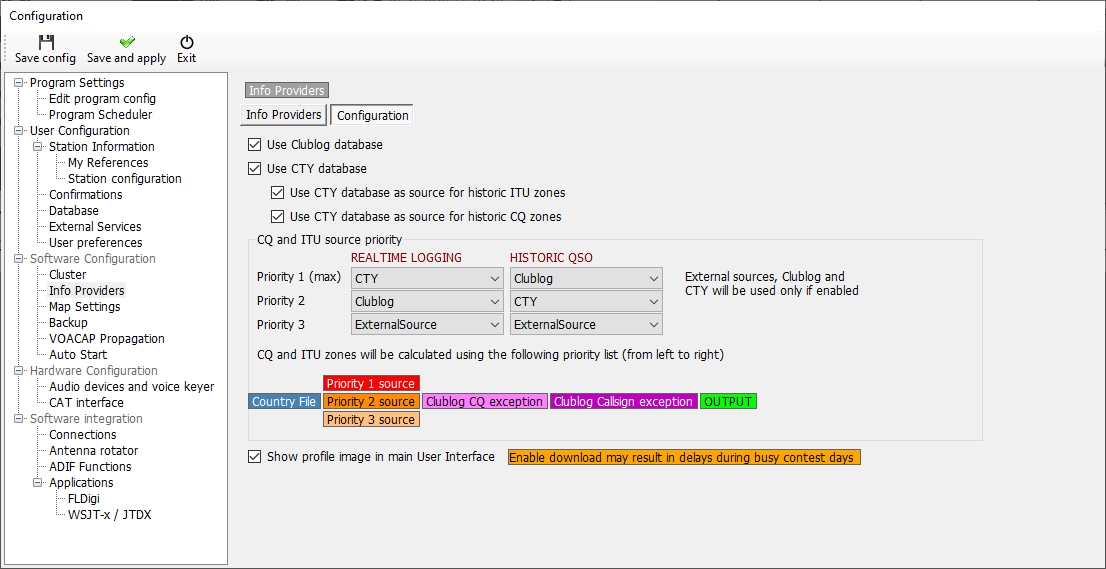 N6VH wrote: ↑
09 Apr 2020, 17:34
To get back to the original topic, I just tested some kG4XXX calls using actual calls. Almost all of them show as Guantanamo Bay, even though they are located in the US. The one exception is KG4W, which displays correctly as US. I updated the country file and restarted Log4OM, and still getting this result. I have attached a screenshot of my configuration.

I have just updated the country file and our configurations are the same. However, I can't find any KG4 2x1 or 2x3 call that shows Guantanamo Bay. I have checked all of the 2x1 calls and they all show United States and DXCC=291. I've also checked many 2x3 calls (not all of course) and haven't found one there either.

There is a setting under User Preferences that reads Overwrite User Gridsquare in Main UI. If this is unchecked, the gridsquare will get "stuck" on the first valid lookup that is done. For example, if you key in KG4AJ it will correctly show DXCC=105 and Guantanamo Bay as country but if you just backspace the J so you have KG4A, it will stay stuck on gridsquare FK29kw and the right map will still show Gitmo although country will be correct and DCXX will also change to 291. I consider this to be incorrect and have written it up in another thread but that is another story. It's important to backspace through the call to get to KG4 and then wait until the grid clears. If you do that, KG4A gridsquare will change to the correct FM08rv in Woodstock, VA. Maybe not the issue but it can make things very confusing. Checking the Overwrite gridsquare box eliminates this behavior.

So, how are you determining that the calls all show Guantanamo Bay? I can't find one by just keying in random calls.
73 - Tom NS8K
Top

Thanks for your reply. I checked the Overwrite User Gridsquare, and that didn't change anything. I also tried running Log4OM as administrator, also to no effect. I have entered various KG4 calls, using calls I know are in the US (I have already worked them), and of those I entered, only one came up as US (the one I already mentioned, KG4W).