by kd0zv
I am trying to figure out why I am getting a lot of Fake calls on FT8. I can be monitoring and get a call from rare DX and I have not even transmitted for the day.

I shut off PSK reporting as I thought it was coming from there but I just got another one calling me.

I just remembered that I have the box checked for HRDlog in Log4OM that shows on the air.

Wondering if someone could be messing around via HRDlog.

Anyone else with issues? I just shut it off for now.

If you are running WSJT-X, check the settings under the Decode Menu. You probably have Enable AP checked. With that checked, it "works harder" at decoding and will make a mistake every once in a while. You will see a few extra letters in the receive window to the right of the normal information when AP has kicked in.

It can be quite a surprise when it happens.

by kd0zv
Yes, and I unchecked it a few minutes ago. I have seen the characters you are talking about on the right. Often include the @ symbol.

So its possible that the AP is guessing something being sent and inserting my callsign trying to complete the decode?

Here's where it is described in section 12.

Basically, assumptions are made about what is contained in the message (which may be your callsign or other parts of the message) and if the assumption plus what is actually decoded is very likely correct, it shows up on your screen. The function of those extra characters is also explained. Here's a short excerpt -

...is judged to have high (but not overwhelmingly high) probability of being correct, a ? character is appended when the decoded message is displayed. To avoid misleading spots of occasional false decodes, messages so marked are not forwarded to PSK Reporter.

There are some very smart people who have figured this all out and are attempting to squeeze out the very last drop of information but they know sometimes the results may not be what was intended. We live in an amazing world!

by kd0zv
Thanks Tom. Good info.

I have seen the characters on the right. Its likely several of the bogus calls I am complaining about had it.

I worked some guy with call K5SDR and it had them on last decode. I wonder without the AP if it would have had to do another round to get the 73. 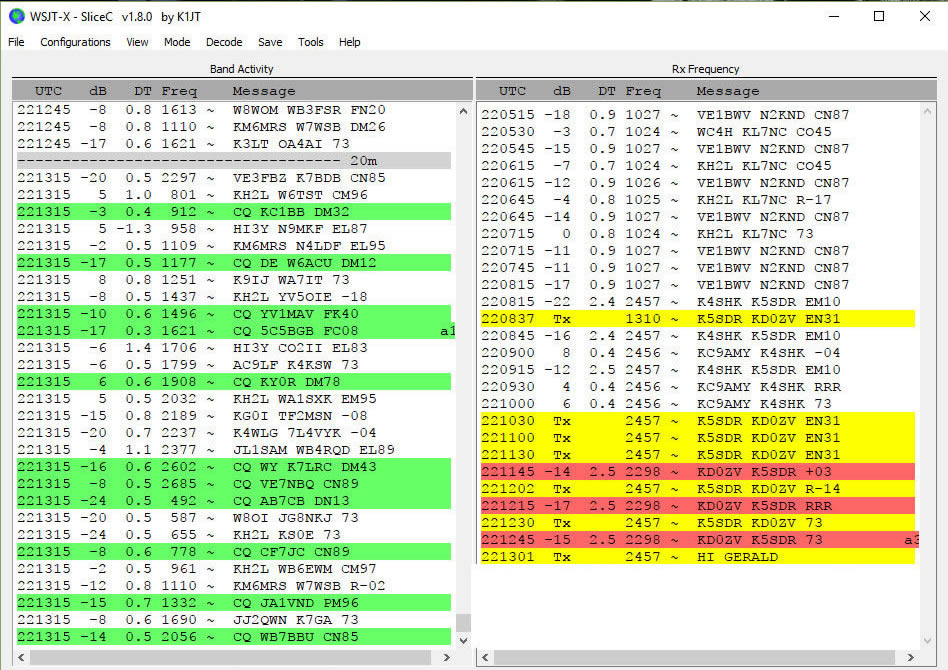 I think it would have taken another round with AP off and that is a nice example where AP did it's job. If I understand it correctly, the a3 indicates your call and K5SDR were assumed. When it was all done, the program must have been quite confident in the outcome because there are no ?'s (unless they were a bit further to the right on your screen).

by kd0zv
Sounds right to me.

I did not know about the a symbols on the right but now that I do the AP is not so bad.

Its just a shock to have North Korea calling you and then turn out not real.