Here's an odd one for you - first time I've seen it. I noticed yesterday that TX5T spots were coming in marked as Clipperton Island. I had not seen this the day before. To be sure, I downloaded a new copy of the countries list and restarted Log4OM. Now it worked correctly . . . until this afternoon when Clipperton started showing up again. Atached is a screenshot that shows it for you. I'd like to think it's something I'm doing wrong, but can't imagine what that might be. Suggestions? (This makes using the "worked grid" useless for the correct country.) It also gets logged with the incorrect country once this starts happening. Note at the bottom of the view (older spots) it is correctly indicated as Australs, but then starts showing up as Clipperton at the 1901Z spot. 'Tis a puzzlement. 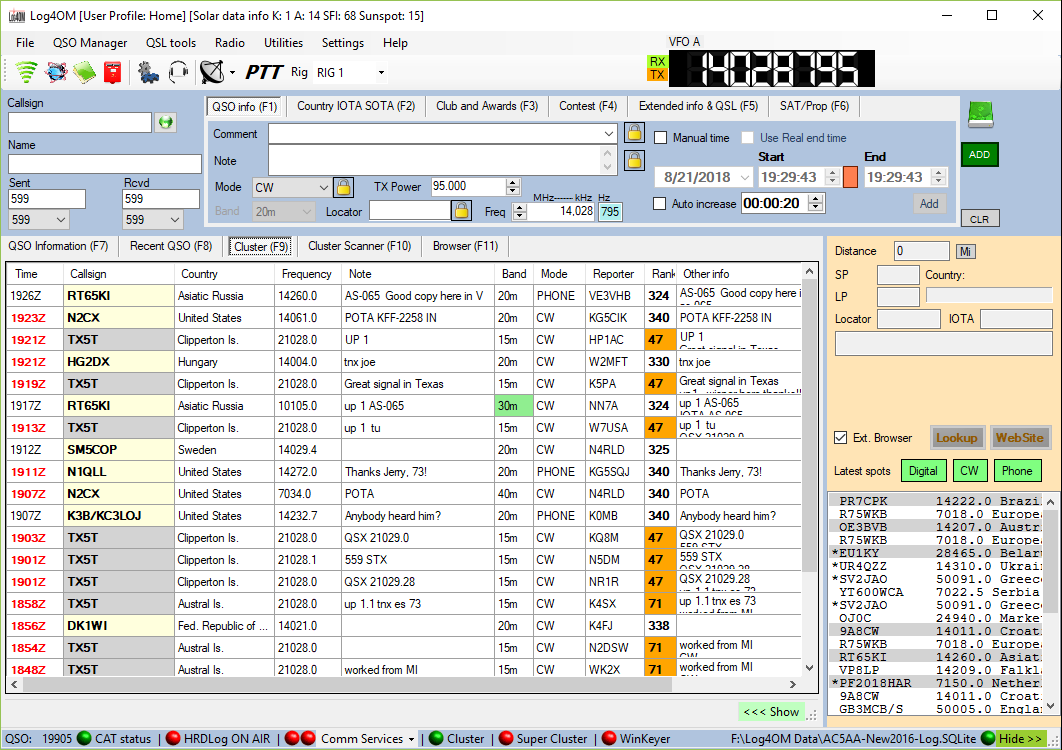 No need to scratch your head. The operation ends on the 21st, today. The SCL currently is for the 21st.

If you look at the effective date of the current SCL (about in the menu bar) it is the 22nd and the OP has ended.

Right now it is the 22nd somewhere in the world.
K7PT-Chuck "#1 Top of the Honor Roll"
Top

Yes, I believe tomorrow was to be the last day, the 22nd, so it should at least indicate correctly through the last day of the operation. I realize there may be some teardown going on that day, but often they keep a station or two running through a portion of the last day. Just my thoughts for consideration.
73, Duane AC5AA
Top

I don't know how often this problem occurs, but it might be a good option to be able to remap a callsign/prefix so that it displays correctly at least for that one day. Some logging software will permanently remap a call/prefix until it is overridden with a new entry. DX4Win does that, for example. (So, it would have a start date and no end date - the end occurs when the next user of the call remaps it, if that happens.) Just a thought. Probably not a big deal to most.
73, Duane AC5AA
Top

This is the first time in over 5 years this has come up. Probably not going to get much attention.
K7PT-Chuck "#1 Top of the Honor Roll"
Top
Post Reply
8 posts • Page 1 of 1